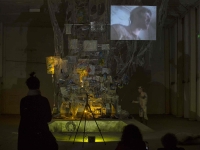 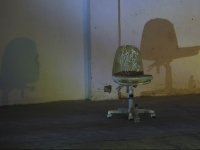 In ‘Integrated Mystery House’ the lone inhabitant of a dilapidated ‘interstellar colonial sleeper vessel’ rehearses a rambling and frenetic presentation about his alterations to the huge defunct control panel – a series of intricately made collages and semi-translucent sculptures. These objects are described as a mind-maps, connecting fragmented memories of a trip to Silicon Valley - a labyrinthine Victorian mansion built by the guilt ridden widow of a rifle maker and haunted by the ghosts of the gun’s victims; immigrant workers in Intel’s microchip fabrication labs made faceless by their clean-suits; the Nazi V2 rocket and its links to Bowie, Disney and Elon Musk. Through his discordant presentation to a hallucinated audience, disparate narratives and anecdotes are soldered together into a prototype for a new kind of integrated circuit.

The work initially took the form a performance within the installation. The video which the character records during the performance was then projected back into the control panel structure for the duration of the exhibition.