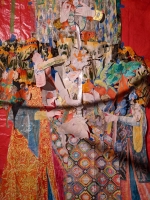 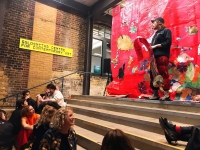 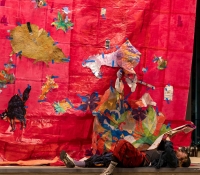 SK_CCA_Perf_v4.mp4 from Sam Keogh on Vimeo.

Running across the basement galleries of the CCA, artist Sam Keogh (b.1985, Wicklow, Ireland) presented a performance, and installation of ceramic sculptures and collaged paintings on paper, that draw on pre-modern motifs and myths of abundance.

The mediaeval myth of Cockaigne; a land of plenty in which food is abundant (it rains cheese), work abolished, and sexuality liberated features in both verse and visual traditions; most powerfully for Keogh in Bruegel the Elder’s painting The Land of Cockaigne, 1567, which shows three figures sprawled in a circular motif under a table bearing food and drink in a rural idyll (a wandering pig in the background bears a knife on its back to aid ease of carving).

Keogh mined this image for its utopian radicalism at a time of strict feudal power relations and peasant revolt. The fantasy of rest, pleasure and perpetual feasts depicted might be read as an important contribution to a proto-communist imaginary. But Cockaigne is also a place where everything is cooked, and so closer to being dead than alive. The main figures are bloated, heavy and immobilised by their gluttony in this world of beige and brown where nothing seems to be growing, but instead slouches toward decomposition as time has slowed or stopped. In this sense, Bruegel’s The Land of Cockaigne can be read as a moralising warning to the ‘work-shy’, that they would end up in a pleasurable but stodgy purgatory rather than Heaven. Keogh see’s these contradictory elements of the myth as being part of its persistence as fantasy. Its qualities of nonsense and impossibility don’t amount to a workable image of a potential future world, but instead appeal to the libidinal or bodily desires of the audience – things which don’t need to be understood to function.

The exhibition also included large collages from cut out painting and drawing on paper. Keogh made these works as ‘cartoons’; 1:1 scale blueprints used by tapestry weavers to reproduce a design in silk. Cartoons were often worked into, cut up and glued back together numerous times before the artist was satisfied with the composition. The ‘Lady and the Unicorn’ tapestries made in the 15th century Flanders are an important point of departure for Keogh’s collages. The original meaning of the tapestries’ complex system of allegorical symbols is lost, but they are thought to depict the five senses, plus a sixth. The main figures of the tapestries are surround by the millefleur (‘thousand flowers’) motif made up of multiple plants in simultaneous fruit and bloom – time and space again collapsed into an image of abundance.

Together, the physical elements of the exhibition formed a phantasmagorical garden of abundance and suspended time, blossoming with images of worried cartoon clocks; sloths; inhalers; videogame avatars; duvets; unicorns and roast chickens that fly into your open mouth. The sculptures and collage served as backdrop and props in a performance which pulled these ideas through each other in a tangled monologue, extending Keogh’s use of objects, images and speech to create environments that coagulate memory, narrative, and history.