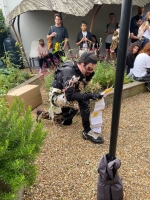 'I Won’t Scatter Your Sorrow To The Heartless Sea' was a site specific performance commission by Southwark Park Gallery for the group exhibition 'Trouble in outer Heaven: Portable Ops Plus' curated by Jamie Sutcliffe in September 2021. The performance took place on the opening night, after which the costume was displayed inside the gallery along with an audio document of the performance playing on headphones. Participating artists included Larry Achiampong, Joseph Buckley, Kitty Clark, Sam Keogh, Hardeep Pandhal, Adam Sinclair and Jamie Sutcliffe, along with The Diamond Dogs Educational Unit: Uma Breakdown, Petra Szemán, Larry Achiampong & Zara Truss Giles.

'Security clothing, plastic, audio track, army surplus camp bed loosely channeling Southwark Park’s history
as a munitions depot during the Second World War, Sam Keogh engages the gallery’s charged location as an opportunity for covert infiltration and an exercise in the poetics of ‘cosplay’, a fan activity which sees its participants dress as their favorite video game characters. Adopting the mutated likeness of Big Boss, protagonist of several Metal Gear games, Keogh will reproduce the action of sneaking into the exhibition’s opening event while ventriloquizing a monologue that reflects on cloned bodies, doubles, and doppelgängers. Weaving the tragic history of the Winchester rifle empire with the circuitries of contemporary cybernetics, and the ghosts of Metal Gear’s fallen soldiers with the extractive residues of oil and blood, the discarded costume of I Won’t Scatter Your Sorrow To The Heartless Sea (2021) will then give voice to the complex enmeshment of bodies, technologies and finite resources that form the interwoven agents of capitalist disintegration.' - Jamie Sutcliffe

‘Trouble In Outer Heaven: Portable Ops Plus’ focuses on the influence and fan cultures of ‘Metal Gear Solid’, one of the most popular video game franchises of all time.

Originally developed for the MSX Spectrum home computer by Hideo Kojima in 1987, ‘Metal Gear’s’ enigmatic story has been told through multiple installments over the course of three decades. Infamous for its distinct play style based upon techniques of secrecy, concealment and stealth, the franchise has pioneered boundary-breaking experiments in player participation, while building a global fanbase for its complicated narrative and strange characters.

Exploring the unnerving possibilities of biogenetic cloning and military espionage, off-shore para-states and the formation of private task forces charged with seizing power from the world’s collapsing democracies, ‘Metal Gear’s’ once bizarre mythos feels disturbingly appropriate to the world we inhabit in 2021.

Just as memes of the game’s iconic graphics have found their way into the culture wars surrounding the 2016 US presidential election, its prescient themes of behavioural manipulation, gamification, unstable truths and geopolitical subterfuge have been increasingly explored by academics; suggesting that ‘Metal Gear’s’ atmosphere of conspiracy and separatism has come to both predict and reflect our unstable global political climate.

From Seasteading* to the subcultural fracturing of online communities, difficult themes of social division are strangely encapsulated in the game’s martial utopia, ‘Outer Heaven’, an ambiguous separatist state of renegade soldiers and mercenaries. Confronting both the ecstasies and problems of fandom, this exhibition asks if critical counter-languages might be found within the intricate traceries of ‘Metal Gear’s’ peculiar brand of speculative fiction, its bleak vision of military oppression, and its potent ideas of hope, service, community and friendship.

‘Trouble In Outer Heaven: Portable Ops Plus’ brings together a group of artists whose early encounters with ‘Metal Gear’s’ unique vision and distinct poetics continue to influence their world-views and artistic practices today. Through performance, sculpture, film, and an education program for young people, the artists explore Kojima’s rich yet often troubling games as opportunities for thinking through positions of decolonial critique, ludic defiance, and anti-fascist resistance.